I started Energy Priorities on the 34th Earth Day in 2004 as the first blog for businesses who want to be more informed and responsible energy users.

It’s been a fun 16 years. I’ve stopped writing about the category, and instead help individual companies communicate the value of their sustainable cleantech innovations through energy marketing communications.

I’ll be listing these fantastic domains for sale so someone else can benefit from them.

This week the world reached a symbolic landmark. The price of oil dropped below zero for the first time ever. One benchmark’s negative price, attributed to a slump in demand during the Covid-19 pandemic , lasted just one day.

But it was a shot heard round the world. From this momentous occasion let’s take a look back, then forward.

You started a what?

In 2004, “blogging” was a new term and it was taking off. I had run a website for 10 years that was a blog, just not called a blog. This should be familiar turf, I thought.

What the blogosphere and media landscape lacked was coverage of sustainable energy for business readers. I felt that several outlets would fill that gap within a few years and I wanted to be among them. I had nothing to lose by going first.

But the early examples of blogging per se were snarky political rants that left me not wanting to be part of it. Could I turn Energy Priorities into a magazine?

There weren’t many examples of online magazines then, but fringe outlets had spent millions to establish the category. Slate was owned by Microsoft, and David Talbot’s Salon had reached its peak of paying – yes, paying! – subscribers. Huffington Post and many others would soon follow.

So I started writing, and by 2006 I was also trying out another new medium, podcasts.

We still talk a lot about energy 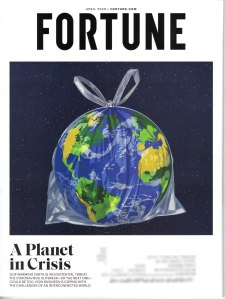 As an International Business student in the seventies I learned about climate change in, of all places, Foreign Policy magazine.

Denis Hayes and Greta Thunberg have stepped in to fill the vacuum left by Al Gore.

National Geographic’s April 2020 edition has two halves with two covers – one optimistic and one pessimistic – about the world on the 100th Earth Day.

So, how well have we done in the past 50 Earth Days?

Renewable energy equipment prices dropped, which enabled large-scale projects across the United States. Solar costs came down 99% since 1975. Technologies improved rapidly, too. For what my wife and I paid for solar panels at our off-grid cabin in 2001, we can get four times as many kW in 2020.

But renewables still produce a tiny fraction of the electricity and heat needed to get America off fossil fuels – which will have to happen if we want to mitigate the worst physical and social effects of climate change.

Americans created the Clean Water Act, the Clean Air Act and the E.P.A. All three are proving brittle at the hands of conservative politicians and appointees bent on destroying them.

The Paris Climate Accord came – and went. Unanimous ratification was a most exciting moment for the environmental community. Modest as the accord was, it was too much for some countries, especially ours, to bear. Paris still has a pulse.

The Clean Power Plan looked like a path to decarbonizing our centralized electric generation system. But it’s being crushed under the heel of an administration that is beyond apathetic.

Public opinion is under attack

A loud minority of Americans are similarly hostile toward environmental regulations. What was once a conservative cause, then a bipartisan issue, has somehow become politicized like everything else.

But it hasn’t worked.

According to Pew Research, a majority of young adults 18 to 38 think the U.S. government is doing too little about climate change.

78% of millennials and 61% of Gen X say the more important priority for our energy supply should be developing alternative energy, not expanding fossil fuels. And that’s among young Republicans. For Democrats overall, the figure is 90%.

What are your energy priorities?

Through Energy Priorities Magazine I published content that was widely shared and syndicated. I collaborated with high-profile publications on energy and sustainability reporting. Podcasts I produced were aired on NPR and available to millions more online. I barely made a dent. But it was a dent, and I was not alone.

The next step is yours. Read about energy and climate change in your favorite news outlets. Get a paid subscription and support independent journalism.

For a deeper dive, try Greentech Media, founded in 2007, which later under the guidance of Editor in Chief Stephen Lacey became the leading bridge publication, making industry technical insider news accessible to business readers outside the energy industry.

Act on what you know. Write letters, volunteer for causes, donate generously — and vote.

Today, energy use and environmental impact are issues every large business takes seriously. Businesses now have three bottom lines instead of one.

Insurers and creditors are asking about carbon risk. Customers and investors are demanding corporate social responsibility reports. Funds are demanding divestiture from fossil fuel industries. Combating climate change is moving from a public cost to a possible path out of economic recession with green jobs.

If you invest, do it responsibly, and take part in governance.

There is a “silver bullet” for our sustainable energy future. It’s not an idea, a technology, a kilowatt, a dollar or pound — it’s the people who bring those things together to make a difference. That includes you.

This site uses Akismet to reduce spam. Learn how your comment data is processed.